Yes! Yes! Yes! Time for the tech next

I am about to go to bed and I will no doubt wake a little tired, but extremely proud of the SMAOS team and confident we have one hell of a show (pardon the pun) ready for opening night this Tuesday at the RNCM in Manchester.

The final floor rehearsal before the technical rehearsal is what I term 'crunch time'. You expect everyone to know their lines, entrances and exits, costumes to work, props to be used, characters to be held even if lines are dropped and you are asking yourself the big questions like 'am I bored?' or 'is the main part of this scene compelling enough?', 'does anything drag?'.
I asked for pace and energy from the cast and got it in abundance. Hopefully everyone heard me laughing away - I expect my chuckling is what led to the endorphins that are flying round me as I type.
Yes, we have a show that makes sense.
Yes, we have a show that is lots of fun and bubbles with energy.
Yes, there are some cracking performances.
Yes, the newly polished original and whacky ending will be unforgettable for the audience.
Yes, it looks marvellous (mostly credited to fun costumes and Lisa's incredible choreography - if you read this let it be known I bow down).
I feel my normal hugely optimistic self after tonight's rehearsal, but I realise a technical rehearsal is a different beast so I'm not complacent. It will require changes and adaption to a set with various levels and there will be lighting, smoke, new props and a huge giant screen with projections!
Energy can be difficult for amateurs to give particularly after a hard days work and only a small  production team watching. Some performers (most amateurs and I am especially guilty of this) raise the bar and give you that engaged energetic performance when there is a real live paying audience. As such, I know come Tuesday the bar will lift even higher. But, tonight everyone really pulled together, paid attention and delivered the goods so thank you.
Pace is a different beast. It is not about delivering lines quickly. It is the feel of the show and filling dead air by picking up queues very fast. Sometimes it relies on a lighting change or the choice of entrance. Parts of Once Bitten rattle along like an express train and I am very glad. The show came in at 1h8m for act 1 and 47m for act 2. That is a sensible length and means a beer in the bar by ten to ten. Despite this I want the challenge to shave at least 4 minutes off the first act by opening night.
I ask for two things now from the company:
Firstly, to really have fun and focus on the show (move into top gear and check your lines etc.)
and secondly to ask themselves whether they could do anything else to sell more tickets.
It is great to hear some nights have sold out. The hard work and quality performances deserve a lively first night so go forth and help us find those unsuspecting victims who fancy taking their first bite ;-)
Finally, I've added a selection of photos to hopefully inspire and sell the show. In hindsight I would have taken more and got the company in costume tonight and asked an actual photographer to help.

Bring on the tech!!!

In one week precisely the curtain will come down on the opening night of Once Bitten. I cannot wait for that moment as my job will be complete and I hope there will be excited applause as the audience have had a fun couple of hours. I fear a quiet theatre due to lack of ticket sales not lack of performance.
Most of my evening has been spent on the production side of the show hunting down sound effects and images whilst checking we have all props and sound effect queues covered. I also spent 15 minutes writing and rehearsing a pitch for the Elaine Page (currently Barbara Windsor) radio show. I am a huge fan of the show and hope we make it on. To be honest all publicity counts at this stage. Despite only having to sell a little over 660 seats next week over six shows we are struggling. I recall ten years ago being able to sell nearly 300 tickets a night for a week run. What has happened? On the Saturday night of La Cage aux Folles we sold out the six hundred seater theatre!
I believe our culture has changed. In the age of the internet, mobile phones and social media we are less planned. It is forgivable to be late for appointments, because you can call or text that you are running late. I completely disagree with this complacency that has kicked in. Likewise whereas friends used to book their theatre tickets in advance they now leave it till the last minute and many buy on the night. Could you imagine not replying to a wedding invitation and simply turning up on the day?
Perhaps it is a combination of poor planning and organisation by most people, a change in attitude in others trained by our new technologies and finally our societies should take responsibility as we rarely execute with the marketing force of a real company, but with wafer thin budgets how can we?
This is perhaps more negative than I'd usually like, but a topic that I am sure many amateur dramatic enthusiasts will have an opinion on. My focus is on producing a fangtastic show and ensuring all the ducks are now lined up - I hope the cast have all done their bit to ensure there are punters lining up too as they deserve a great audience.
Posted by Ross at 15:44 No comments:

In two weeks time the curtain raises on a stage of zombies and vampires as our new musical opens. Right now we are at that awkward stage where actors lines are a little hazy, some dance steps are out, chorus members are finding their entrances and we have a set half built and lots of empty seats each night. This is the reality of theatre.

This is the 40th show that I have been involved with so I know everything will now piece together ready for a burst of energy in 2 weeks when the company hits the stage.

I'd like to share with you some of the key steps that remain to take a show to the stage. Firstly, I just sent out a sheet of entrances and exits for the chorus (this will minimize issues), tonight I have to produce a directors script with edits for the production team and Nigel (our set designed and my mentor throughout this process).

Next, we have a principal rehearsal Wednesday night where we need to run things together and ensure the end of the show really packs the punch it needs. I expect to help actors with their actable verbs.

Thursday is a production meeting where we ensure we are all taking the right actions to ensure we have all the props, costume and sound equipment. We currently do not - not unusual. Following the meeting it is a run through with the whole company.

Wow! I've only got to Thursday. Beyond that is our launch party on Saturday night in Baa Bar (everyone welcome) and then more run throughs, painting of set, construction of set, lighting design, costume checks oh and finally the more technical challenges of making people disappear on stage!!!!

It is fair to say the next couple of weeks are going to be busy but we have an awesome team assembled and every ones focus is like a lazer beam at this stage. This necessary focus always ensures the ingredients come together to form a potent spell for the audience. Let the magic begin!!!

(The photo is of John and Ben constructing the swivel door used by zombies etc. - it will look so different once it's painted and no set. Watch out for it!) 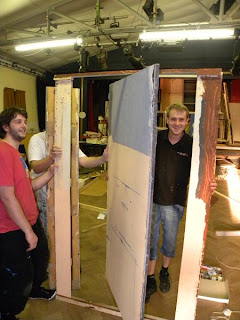 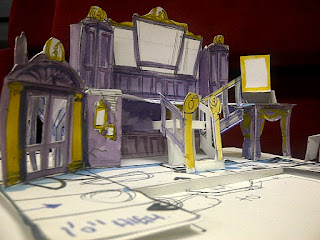 I am sorry it has been 3 weeks since my last confession entry. It turns out I couldn't even figure out which username/account I was using for this blog so that just cost me an hour of time. It looks like I've somehow amassed 3 or maybe 4 google related accounts, which is either a result of my utter stupidity or a confusing product portfolio and interface. I'll leave you to judge. Ultimately the lack of entries is my own fault - note to director 'must try harder'.
3 weeks is a long time and we have made some fantastic progress. I've attached a 3D model of the set produced by mentor Nigel Machin. It reminds me of Scooby Doo and haunted mansions with a glam modern feel to it. In 45 minutes I am meeting Nigel and a dedicated group of volunteers to paint the various flats and floor that will make the set. Set building and painting etc like DIY is not a task I relish and neither am I good at, but as director the show is my vision and as the leader I am more than happy to roll my sleeves up and get mucky. The next photo you see will likely be of various set bits. I'm very thankful to Nigel for all his work because not only does the model look great, but it practically helps the actors and I visualize the space and the production team have discussions about lighting and other key elements.
Whilst my blogging has had a rest the show blocking and prop preparation certainly hasn't. There are already looking like some incredible performances by the principals. About 2 weeks ago I started using the word 'melodrama' more readily and very quickly Ed and Justine had turned Zac and Bella into a pair of likeable and believable (despite being melodramatic) leads. Bella pulls the most beautifully chosen faces throughout. I plan to big everyone up with some public notes nearer the show so each actors strengths are really praised and re-enforced.
With 6 rehearsals before the technical rehearsal tensions will start to rise and some imperfections and expectations will get left behind. That is theatre. Tomorrow I shall be focussed on ensuring the end of the show is cohesive and has pace. It is currently slow and all over the place with a chorus who don't have a clue what is happening. All this is completely my responsibility and within a couple of hours we'll have it easily fixed. I simply hope that the momentum is now building for regular blogs and most importantly an incredible show that will sell out. Lets hope that this second bite at Once Bitten is now met with shyness. Sales rely on everyones enthusiasm and energy to push it. So in the words of the title track Once Bitten 'once bitten, twice shy, three times is lucky, fourth time feeling so alive'. I feel very much alive and packed with hard work, talent and some luck this third run of Once Bitten will no doubt be a huge success.
Posted by Ross at 07:34 No comments: